The new benchmark in dross processing

Dross should not be considered as waste but as an economic source of valuable aluminium. Dross generally represents between 1% and 10% by weight of the melt, and, depending on the process, its metal content can vary from 15% to 80%. Traditionally, aluminium has been recovered using rotary salt furnaces, which are energy intensive and produce toxic waste. TAHA has developed and implemented a cost-effective, environmentally friendly two stage dross process which has removed the need for salt or extra energy.

TAHA’s processing facilities are positioned as close to the client’s furnace as possible to avoid the need to reheat dross. With this rapid, low-energy process, up to 90% of available metal in the dross can be recovered in the first stage. No salt is added during the recovery process so recovered aluminium can be returned immediately to the original furnace without further alloying.

Most of the remaining aluminium in the dross is recovered in a second stage through a meticulous mechanical separation process including the use of a non-ferrous metal separator. Recovered metal is collected, remelted and sold or returned to the cast house. The residual oxides can be used in a variety of downstream product applications to complete TAHA’s zero waste solution. 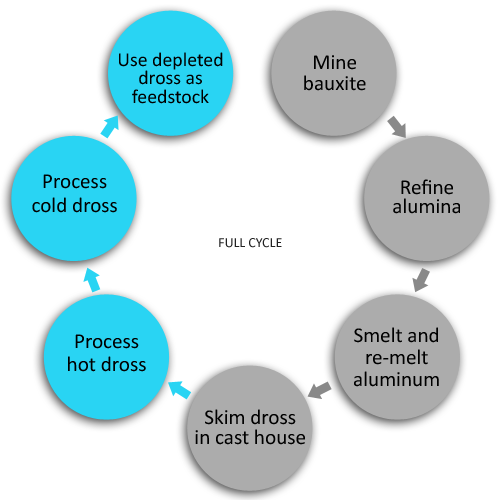 Dross processors using rotary salt furnaces produce “salt cake”. In Europe salt cake is now seen as so hazardous to the environment that dumping in landfill facilities is no longer permitted. It has to be treated separately in salt slag facilities.

TAHA eliminates a serious environmental concern by not using any salt or other chemicals during its aluminium recovery process. Depleted dross is processed to serve as feedstock for other products.